I am Now a Web3 Published Author!

Home » News » I am Now a Web3 Published Author!

I am Now a Web3 Published Author! 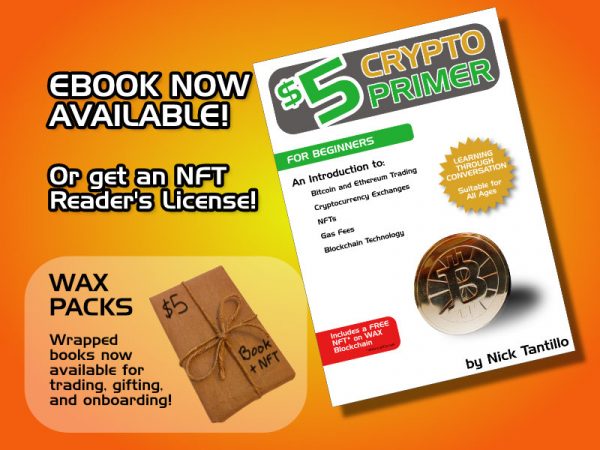 What’s that, you may ask? Well, it’s self-publishing but on the blockchain!

My new Five Dollar Crypto Primer is for sale on traditional ebook sites like Kindle and more, mainly so the cryptocurrency averse don’t feel left out. The web3 part means the entire book has been published to a public ledger and is available for download and purchase as an NFT!

I’ve come across a few authors under the impression that they were the first to think of a book NFT… to them, I say, dig a little deeper because there’s gold in them thar hills. It varies depending on which cryptocurrency you are talking about, but creative projects are out there.

Some of the cooler/crazier ones I’ve run across were:

My Primer is now available as a non-transferrable reader’s license on WAX (including a bonus GOO GOONS NFT) and a limited 100 edition run on VOICE. These blockchains are based on EOS, which I have found has the lowest fees and hardly any barrier to entry.

Why Five Dollars? Why WAX and VOICE, not Ethereum?

I believe the information I’m offering is valuable. Still, I wanted my book to fit into somebody’s discretionary money, that is, what a person might use on an impulse burrito at 7-11 or a cup of coffee. The gas fees to mint a book on Ethereum could easily be over a hundred dollars, freezing a lot of people out. I want to show that cryptocurrency trading and NFTs aren’t only for rich people. Education is the only way to combat all the fear and misinformation permeating the space right now.

I just want to protect people from scams, man. Ya know? I hate scams.

Oddly enough, the only platform where the book costs more than five bucks is Apple (they marked it up to 5.99.) Oh Apple, you’re naughty.

Please consider starting your cryptocurrency journey with me by buying one for yourself, a friend, or a relative. The Five Dollar Crypto Primer has been designed to be approachable to adults of all ages.

And hey, it costs the same as a coffee. Maybe less now…