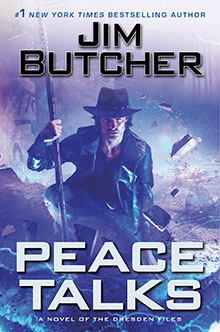 Peace Talks by Jim Butcher is the 16th book on a long running series. I feel like this title has particularly tried to harken back to the earlier days of the series, referencing Harry’s conflict with ghouls and the sorcerer Justin from the first book. This creates a bit of a conundrum for possible new readers. If they start here, they will have a very hard time with references and lore. On the other hand, Jim Butcher’s writing has come a long long way since Storm Front in 2000. I feel like these books are best if you keep up with them in real time.

At what point should sequels not have to stand on their own? I can see how in a trilogy a new reader should be able to pick up any one of the books and have a great time with it (and maybe buying the other two.) One of my favorite authors Mark Lawrence has done this really well with his sets of trilogies set in the Broken Empire universe. New readers would need to start with Storm Front from 21 years ago to be fully caught up. I’m into old comics though, I get it.

Dresden files has always read more like a comic book series to me anyway. There are so many supernatural creatures he can’t really keep adding new ones. So much collateral damage to the world and stakes so high, it’s hard to top them. This book manages to squeak by with a tight adventure and political intrigue revolving around the courts of fairy. For longtime readers I think it’s an excellent addition to the series.

The ending left me wanting more, and unlike the previous books, Battle Ground picks up exactly where this one leaves off. So far they feel like two halves of the same book, which might be the intention although that hasn’t happened with previous titles that I can recall.

Not that I’m complaining but working from home has really slowed down my time spent listening to audiobooks. I didn’t realize how much I relied on a 45 minute commute to burn through my audible credits. James Marsters has done an excellent job narrating this entire series (Spike from Buffy the Vampire Slayer.) He was so good, that when he wasn’t able to narrate Ghost Story, they actually recorded a new version years later just to make the set complete.

I would definitely recommend this book to long time readers. New readers may want to start further back, since (without spoilers) the series changes drastically after the aptly named Changes which is book #12. I feel like that’s where the stakes went from personal to worldwide.